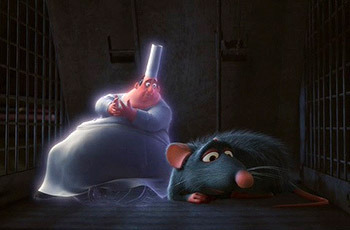 "What can I do? I am a figment of your imagination."
Rémy: I pretend you exist so I have someone to talk to! You only tell me stuff I already know! I know who I am! Why do I need you to tell me? Why do I need to pretend?
Gusteau: [chuckles] But you don't, Remy. You never did. [disappears]
— Ratatouille
Advertisement:

Detective Bob is a detective. He's in the middle of an important case when, suddenly, a whole bunch of traumatic stuff happens to him, he hits his head on an orange crate, and he somehow ends up taking a lot of drugs. Now, wherever he goes, he is followed by a talking pink hippopotamus named Oswald that only he can see. Bob is hallucinating!

This is bad for the case, right? Clearly, Bob is no longer mentally fit to do his job, and should go somewhere to receive treatment until Oswald goes away. Right? RIGHT?

For you see, Oswald is a manifestation of Bob's subconscious. He thus knows all about the case, including details that Bob apparently ignored or didn't quite put together. So instead of impairing Bob's ability to function, Oswald is basically akin to temporary mental superpowers, helping to point Bob in the right direction.

In real life, hallucinations usually aren't so helpful, and you probably shouldn't take advice from one.

For extra creepiness, the hallucination may know things the person they haunt shouldn't know. This is usually a clue they are a ghost or an Angel Unaware.

SPOILERS to follow, as some of these hallucinations aren't identified as such until The Reveal.

Midway through, Alan encounters a figment version of Barry sent by Thomas to help Alan escape.

Midway through, Alan encounters a figment version of Barry sent by Thomas to help Alan escape.