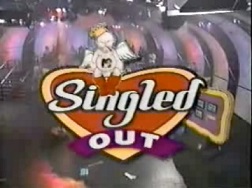 Game Show on MTV that ran from 1995 to 1998 which turned The Dating Game Up to Eleven. Hosted by Chris Hardwick and Jenny McCarthy (later replaced by Carmen Electra), the show centered on a single woman choosing a date from among 50 young men, and a single man then taking his turn with 50 women. As with its predecessor, the winning couple was set up on a date after the show.

In each game, the featured contestant, or "Picker", would eliminate undesired dates using six categories ranging from the innocuous (height, weight) to the blatantly sexual ("Bedroom Behavior", "Package"). Once eight or fewer remained, the Picker would start individually asking them Dating Game-style questions, having them perform certain tasks, or both. The "Picker" would then "Keep" or "Dump" each candidate based on his or her answer or performance. The three who survived this would then be asked questions with two possible answers; for each one that matched the Picker's, a candidate would move one step closer to the Picker. Whoever reached the Picker first won the date; in the event of a tie, Hardwick would ask a "closest without going over" question to break it.