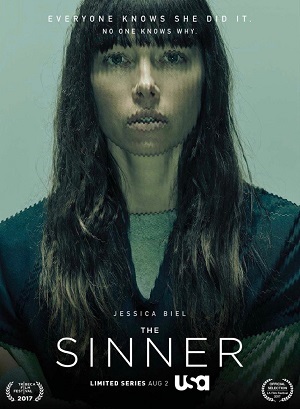 The Sinner is an anthology series airing on USA Network, created by Derek Simonds and starring Bill Pullman.

In Season 1, on a beach in Dorchester, young mother Cora Tanetti (Jessica Biel) murders a young man in broad daylight, but can offer no explanation for why she did it. The season follows the efforts of Detective Harry Ambrose as he tries to figure out why.

In Season 2, Harry, now divorced and making time until his retirement, is called out to the town of Keller to help investigate a double homicide carried out by a 13-year-old boy. When the boy is suddenly tried as an adult, Harry and new partner Heather Novack struggle to find some way to explain the boy's actions, all while dealing with a secretive religious sect - whose members include Vera (Carrie Coon) - and issues from Harry's past.

In Season 3, Harry is on the verge of retirement when he gets called in to investigate Jamie Burns (Matt Bomer), a prep-school history teacher who was caught in a horrible car crash. Initially, it just looks like a drunk-driving accident, but Harry finds Jamie's behavior suspicious and starts looking into it.

In Season 4, a now-retired Harry travels to the island of Hanover in Maine, accompanied by his girlfriend Sonya. During a fit of insomnia, he goes for a walk and happens to see a distressed young woman seemingly jump off a cliff. The woman, Percy Muldoon, happens to be the prized daughter of a volatile local fishing family, and Harry soon finds himself drawn into the ensuing case.