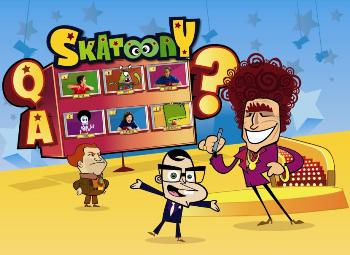 Skatoony is a British children's animation/live-action hybrid Game Show in which real child contestants compete against animated characters. The brainchild of James Fox and Brian Boyle, it was originally developed in 2001 as a competition microsite on Cartoon Network UK's website (in co-production with FremantleMedia Animation), but became its own series in 2006 that ran for 3 seasons of 39 episodes.

The show's hosts are:

The show's format is that three child contestants and three toon contestants compete on a quiz show lasting three rounds. At the end of the first two rounds, the two lowest scoring contestants are eliminated. The first round is always "Bang On! or Bogus?", a rapid-fire true-or-false questioning round; with "Bang On!" meaning true, and "Bogus!" meaning false. The last two rounds vary between episodes. At the end of the third round, only 1 of the 2 remaining contestants gets eliminated, and the remaining contestant (who is always one of the children) takes on the Skatoony Quiz Champ Challenge, where they must answer ten questions correctly in 90 seconds. After 45 seconds, the clock will temporarily stop, and The Earl's Halfway Deal will be offered, trading in time for correct answers (10 seconds per point to raise the contestant to a maximum of 7 points or 25 seconds for 3 points if fewer than five questions have been answered correctly at that point). If the contestant finishes with time remaining and gets ten questions right, the contestant wins a prize.

In 2010, a Canadian remake of the series premiered on Teletoon. Co-produced with Marblemedia, it has the same format as the British version, but different casting (the hosts' voice actors are changed while the Montreal and Toronto versions feature different child contestants). Additionally, characters from Teletoon's flagship series of the day, Total Drama and Jimmy Two-Shoes, appear as some of the animated contestants.

There's also a Middle Eastern version co-produced with Blink Studios that premiered on Cartoon Network Arabic in 2011. It is entirely identical to the British version except it guest stars characters from the Arab-language animated series Freej