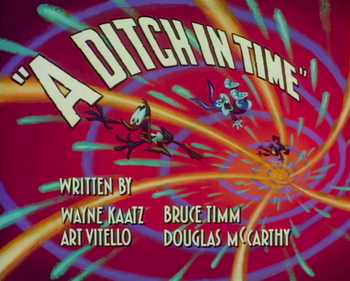 Basically, an episode whose plot revolves around Time Travel, whether it's to the future or to the past. Maybe the villain wants to remove the hero from history. Maybe the resident Gadgeteer Genius wants to see the tech of the future.

Groundhog Day Loops don't really qualify, since in that case the time travel is reset at the end, although if the Grandfather Paradox applies or might apply, it still qualifies. If every or nearly every episode focuses on time travel, it's best not to list them here, since that would take too long.

In some cases, the time travel is a Framing Device for a Recap Episode, or for giving a character's origins.

After accidentally getting time orbble juice, Wander and Sylvia end up traveling through the past.

After accidentally getting time orbble juice, Wander and Sylvia end up traveling through the past.