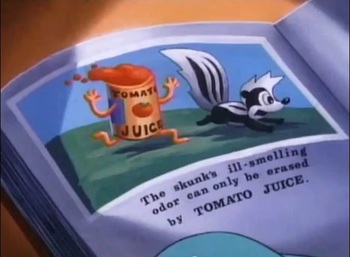 A well-known North American remedy for being sprayed by a skunk is to take a bath in tomato juice—although tomato paste, tomato sauce and even just tomatoes themselves are also popular alternatives. In fiction, whenever a character is sprayed by a Smelly Skunk, they'll be forced to take a bath in some kind of tomato solution.

Unfortunately, this doesn't work in real life, at least not in the way that most people think—at the most, tomato juice will just mask the smell instead of truly getting rid of it. There are better remedies out there than dousing yourself in tomatoes. The most popular recommendation,

for those curious, is a combination of peroxide, baking soda, and liquid detergent.note This combination of chemicals breaks down rapidly and must be prepared immediately before use. It breaks down the nasty smelling sulfur compounds that are insoluble in water into odorless (and water soluble) sulfonates, which instantly puts a stop to the smell. This also counts as Bizarre Beverage Use for juice and Unconventional Food Usage for paste, sauce, soup, and raw tomatoes.