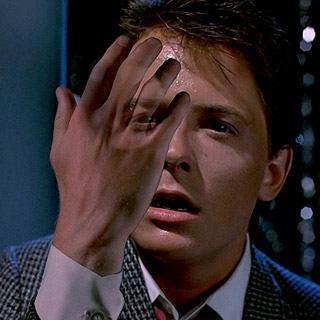 Oh no, Marty's being infected with bad green screening!
Advertisement:

In many Time Travel stories in which a character in the past is changing the future, there will be an object, or sometimes a person, from the future that is directly affected as a specific consequence of the Time Traveler's actions.

The main effect is that this object, or if it's a photograph, the subjects on the photo, will vanish or reappear as changes are made to the timeline. This is done typically to show whether what the protagonist in the past is doing the right or wrong thing.

In short, a Ripple Effect Indicator is an object, originally from the future, that fades away or otherwise changes based on actions in the present changing the timeline.

See also Ret-Gone, which can be an effect of this. See also Delayed Ripple Effect and Ripple Effect-Proof Memory. This is usually seen in "overwriting the timeline" in the Temporal Mutability scale.

After Marty prevents his parents from meeting, his siblings start to fade from a photograph.

After Marty prevents his parents from meeting, his siblings start to fade from a photograph.