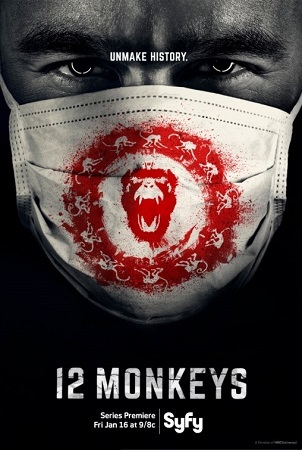 12 Monkeys is a television series adaption of the 1995 film of the same name and the classic 1962 French short film it was based on. It was produced by Syfy and premiered in January 2015. The story, which loosely follows the plot of the film, has been updated to the present day.
Advertisement:

Time traveler James Cole (Aaron Stanford) travels from the year 2043 to the present day in order to stop the release of a deadly virus by the enigmatic Army of the Twelve Monkeys. That virus, in Cole's original timeline, caused the death of 93.6% of the world population. Cole seeks help from the virologist Cassandra Railly (Amanda Schull).

The show ran for four seasons.