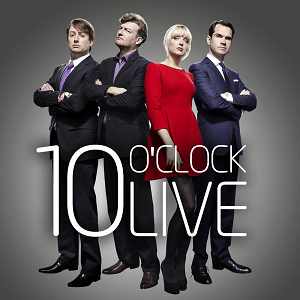 From left to right: David, Charlie, Lauren and Jimmy
Advertisement:

10 O'Clock Live was a live broadcast show at, well, 10pm. It started life as Channel 4's Alternative Election Night (2010), the success of which spawned a series. Hosted by Charlie Brooker, Jimmy Carr, Lauren Laverne and David Mitchell, it takes a humorous look at the week's news but also attempts to sort out some important issues along the way.

Not a huge ratings success at broadcast, but its success on-demand did surprise Channel 4 execs. It ran from 2011 to 2013.

The show has several segments that highlight what each presenter does best and are, generally, variations on what they've already done in the past. Here's some recurring ones;

Contains Examples of the following tropes;