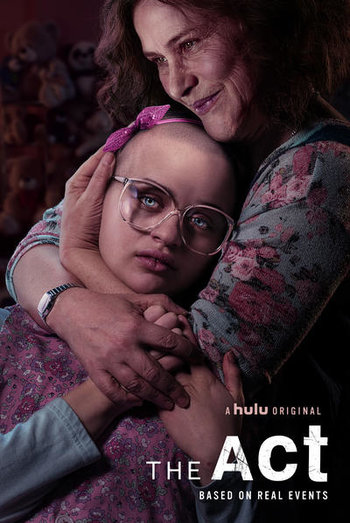 The Act is a Hulu original true-crime series.
Advertisement:

The first season is based on a 2016 Buzzfeed article

As an infant, Gypsy Rose Blanchard was diagnosed with a laundry list of life-threatening illnesses that left her unable to walk, confined to a wheelchair, and unable to develop mentally past the age of a fifth grader. Her tireless single mother Dee Dee struggled to care for her in the face of an abusive husband who abandoned the family, mounting medical debt, and the loss of their home—and all Gypsy's medical records—in a hurricane. Fortunately for Dee Dee and Gypsy, the community stepped in. Now they have a beautiful little pink house in the middle of a quiet neighborhood full of friendly people who are charmed by Gypsy's childlike sweetness and in awe of Dee Dee's devotion to her daughter.

Except it's all a lie.

Gypsy knows she isn't really sick. She knows she can walk. And she knows that her mother will never, ever let her free.

And on a summer night, in a little pink house filled with secrets, something terrible is about to happen.