Literature / When You Reach Me 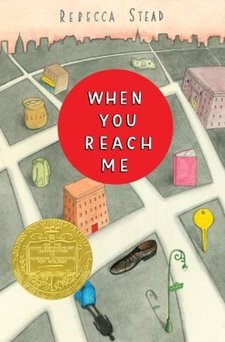 It's 1979 and twelve year old Miranda, while helping her mother prepare for a stint on The $20,000 Pyramid, is thinking of all the events that happened the previous fall. If it was up to her, she'd probably not think about them. But then there are the notes asking her to do just that, to write down everything that happened last fall. Notes telling her that someone is coming to save both a friend and their own lives. Notes from a time traveler.

When You Reach Me is a 2009 novel by Rebecca Stead with allusions to A Wrinkle in Time. Despite its time traveling elements and mystery, the book is at heart a Coming of Age novel that subtly deals with social issues, racism, and the quiet dangers of late seventies New York. It won numerous awards, including the Newbery Medal.