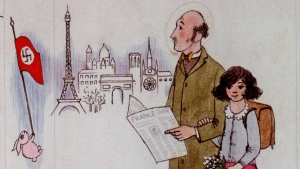 When Hitler Stole Pink Rabbit (known as Als Hitler das rosa Kaninchen stahl in Germany) is the semi-autobiographical story of children's author Judith Kerr (of The Tiger Who Came to Tea fame) whose family, fearing prosecution from Hitler fled their home in Germany in 1933 to Switzerland and France before finally settling in Britain. She was nine years old, for the record.

The names in the story were changed: Judith is named Anna in the novel, her brother Michael became Max, and so on.

The novel is the first part of what would become Kerr's Out of the Hitler Time trilogy followed by Bombs on Aunt Dainty which charts the experience of Kerr's family settling in London while seen as an "enemy alien" as the war wages on, and concluded with A Small Person Far Away which follows Kerr's adulthood, marriage and career.