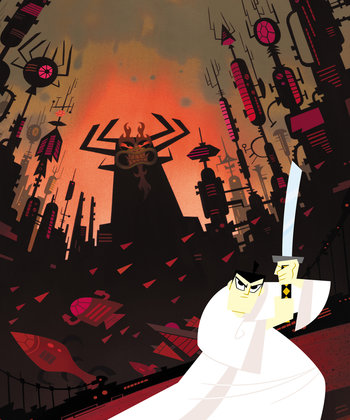 The future that is Aku.
Marty: I don’t get it, Doc. I mean, how can all this be happening? It’s like we’re in hell or something.
Doc Brown: No, it’s Hill Valley, though I can’t imagine hell being much worse!
— Back to the Future Part II
Advertisement:

One major source of Villain Decay comes from the fact that, no matter how dangerous the Big Bad is presented as, the risk of them winning becomes an Informed Ability since Status Quo Is God means they don't win, and whatever horrible plot they hatched and rant about doesn't even scratch at The Masquerade. This is why audiences are genuinely shocked when The Bad Guy Wins, and why it's one of the most powerful Downer Endings possible. Some stories try to avoid the former by using a limited form of the latter in the form of the heroes visiting a Bad Future, and returning to the present with the motivation to Set Right What May Go Wrong. But not all stories allow for Time Travel, so an intermediate and more challenging route is to have the Villain win part way and have the setting become a Villain World.

The Evil Overlord will have their Evil Plan go off without a hitch either because The Hero and their friends were put out of action, or despite their best efforts, or simply because they weren’t around at the time. The armies of the Big Bad are everywhere, every country and the UN gives them absolute power, which they use to institute their vision of the world. Usually the world becomes a Dystopia, sometimes a Utopia with a "minor" flaw like Utopia Justifies the Means or removing The Evils of Free Will. Expect them to rename cities after themself. May also result in a Crapsack World (though one dominated by a specific entity as opposed to just generally crummy). Or they may bring about The End of the World as We Know It and create Hell on Earth. Either way, the heroes have failed to stop them, they have changed the face of the world, and the heroes must now fight to save what's left before the Evil Overlord grows too powerful.

Thankfully, since the Genre Shift happens with enough time for the heroes to regroup they usually do succeed at reversing the villains' triumph. Depending upon the grade of Phlebotinum available, this can end with either an outright reset, or a more realistic scenario where the heroes' help is implied to get the world back on its feet eventually.

Occasionally this will be the result of a Nightmare Sequence or a It's a Wonderful Plot. This setting is the habitat of La Résistance. Very likely to be a Crapsack World. See also Vichy Earth, Easily Conquered World and Evil Only Has to Win Once. See To Create a Playground for Evil for when a villain's goal is specifically to create a villain world. For a specific version where evil counterparts of the heroes are ruling the villain world for fighting for the forces of evil, see Mirror Universe. If the enemies in question are Those Wacky Nazis, see Alternate-History Nazi Victory.

Hill Valley with Biff in charge

Hill Valley with Biff in charge