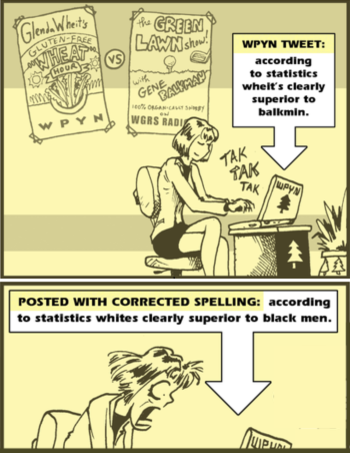 Homer: If we wanted to see Japanese people, we could have gone to the zoo.
Marge: Homer!
Homer: What? The guy who washes the elephants is Japanese! His name is Takashi. He's in my book club!
— The Simpsons, "Thirty Minutes Over Tokyo"
Advertisement:

A character says or accidentally does something that is interpreted by everyone else as being racist or some other breed of bigotry, and they proceed to chew him out or start shunning him for it. If it is not the main plot for the story, it can be quickly cleared up, but otherwise, any attempt to prove that he's not really racist ends up backfiring and making him look even more racist. When the accused is finally confronted on his behavior, expect him to say something to the effect of, "I don't hate you because you're [minority status], I hate you because you're [completely valid reason to dislike someone]."

If the people who believe this person prejudiced are themselves prejudiced, they'll be proud of him, leading to Your Approval Fills Me with Shame. The character may also try (unconvincingly) to deny it by saying "Some of My Best Friends Are X."

Some people really don't like blackface. Sadly for the Forest Demon, that's just how he looks.

Some people really don't like blackface. Sadly for the Forest Demon, that's just how he looks.