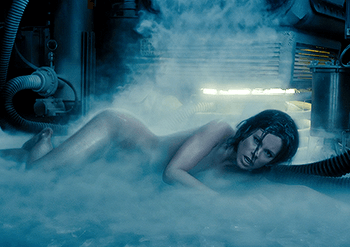 "We are born naked, wet and screaming... then things get worse!"
— Bumper sticker
Advertisement:

A character's first appearance onscreen is without a stitch of clothing.

Depending on context, it can imply vulnerability, primality, being above silly human cultural standards, Fanservice or just symbolize the birth of the story.

It can also sidestep Fridge Logic questions like "Why didn't so and so bring weapons or MacGuffin with them?" Answer: You Can't Take Anything with You, including clothing; thus justifying a Bag of Spilling.

Can be played with Naked First Impression, but it isn't necessary that these tropes go hand in hand, nor should they be confused with each other. Compare Full-Frontal Assault, Innocent Fanservice Girl, You Wake Up in a Room. Clones are usually Naked On Arrival (since you don't have clothes in your DNA). See Naked on Revival, a sub-trope.

Truth in Television (you cannot be born otherwise).

Reason #9 why time travel is no good: You WILL show up naked.

Reason #9 why time travel is no good: You WILL show up naked.