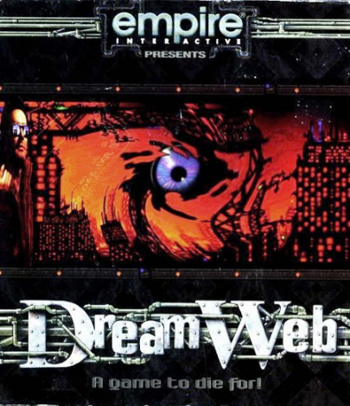 DreamWeb is a Cyberpunk top down Adventure Game, developed by Creative Reality and published by Empire Interactive Entertainment. The game was released in 1994.
Advertisement:

Ryan, a bartender, hasn't been sleeping well. Haunted by nightmares and strange visions, he eventually dreams of a monk-like figure telling him about seven evil people who, if united, will destroy the eponymous Dreamweb, and send mankind spiralling into chaos. And there's a serial killer on the loose, and thanks to these blackouts and nightmares, Ryan isn't entirely certain it's not him.

Rapidly descending into madness and just wanting his nightmares to stop, Ryan accepts his mission, then wakes up in a puddle of cold sweat next to his beloved girlfriend in her house, and late for work. Again.

The game is now free, and can be downloaded here