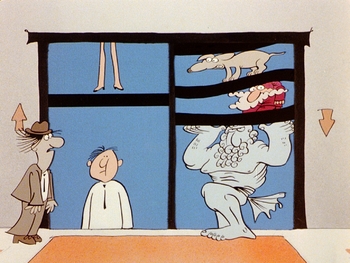 Moto Perpetuo is a 1981 animated short film (7 1/2 minutes) from Hungary, directed by Bela Vajda. It was produced by Hungary's Pannonia Film Studio.

A man walks through the lobby of an office building. He attempts to board the elevator, but fails. It soon becomes apparent that the twin elevators—one going up on the left, one going down on the right—are not actual elevators, but windows on the human experience. As the man goggles with astonishment the whole range of human life and civilization plays out in the two elevators. People get married, trains careen off bridges, bicyclists race by, nuclear bombs go off, The Beatles play music, and more.

The title is the Italian for "perpetual motion", referring in this context to perpetuum mobile

, a musical term referring to music played non-stop at a very fast tempo. The score for this short is a violin playing at just such a fast tempo.