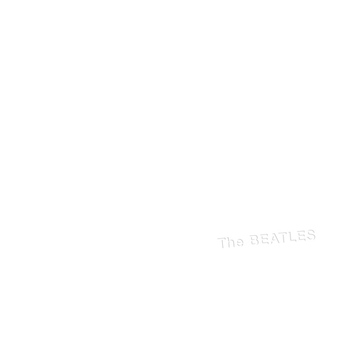 The Beatles is the tenth studio album by The Beatles, released in 1968. "The White Album" is the unofficial moniker for the album, owing to its completely white album cover. Nowadays, most people - including the band themselves - refer to this nickname rather than the official title, both because of the iconic nature of the cover and to distinguish it in discussions not only from the band themselves, but also the two self-titled compilation albums released in 1973 (which themselves are respectively known as "the Red Album" and "the Blue album").

The album had its roots in the group's extended visit to Rishikesh, India in early 1968, where they took part in a retreat at the ashram of Transcendental Meditation founder Maharishi Mahesh Yogi

(along with Donovan, Mike Love and Mia Farrow). While the retreat ended in disappointment, all four Beatles had found the isolated environment to be musically stimulating, and they arrived back from India with dozens of new songs. After putting together a set of demos of the songs at George's house in Esher, recording formally commenced at the end of May with John's "Revolution 1". Four-and-a-half months later, another Lennon song, "Julia", was the 30th and final song recorded for an album that had experienced a dramatically Troubled Production.

The White Album became the Beatles' first and onlynote not counting their compilation albums double album. The songs feature a lot of variation in style and mood. Overall the record sounds almost like a compilation record featuring the band members as solo artists instead of a unified work. The atmosphere at the sessions got so bad that the famously chill Ringo Starr grew frustrated and briefly quit the band (Paul McCartney took over on drums for "Back in the USSR" and "Dear Prudence", and John Lennon and George Harrison also contributed to the "USSR" drum track). From this album on Yoko Ono made herself present next to John in the studio and this certainly caused even more tensions, seeing that the band had always recorded with them four alone.

Though not as popular as other Beatle records like Sgt. Pepper's Lonely Hearts Club Band or Abbey Road, this album still a huge inspiration for numerous rock bands. When something gets compared to the White Album, it's almost invariably a shorthand way of saying "long album with huge variety of styles, inevitably will attract complaints about Album Filler". But everyone agrees it is an important and influential record. It generated hits such as "Back in the USSR", "While My Guitar Gently Weeps", "Ob-La-Di, Ob-La-Da", and "Revolution" (though the single version is a totally different arrangement). "Dear Prudence", "Helter Skelter", "Happiness Is a Warm Gun", "Don't Pass Me By", "Sexy Sadie", and "Blackbird" have become fan favourites, while "Revolution #9" is perhaps the most notorious and audacious track: exciting for Avant-garde Music fans and Album Filler to most other people.

Also got some notoriety because Charles Manson misinterpreted some lyrics from the songs "Piggies", "Revolution 9" and "Helter Skelter" to order his followers to go on a murdering spree.

This was the last Beatles album to have a separate stereo and mono mix as more popular music listeners were upgrading to stereo equipment. The mono version was only released in the U.K. and would be the last mono release by the band.

2018 saw the album's 50th anniversary celebrated with several "deluxe" sets, which included the complete Esher demos and numerous outtakes given their first official releases (after being featured on countless low quality bootleg albums), and, as with the anniversary release of Sgt. Pepper's Lonely Hearts Club Band, a new stereo mix by Giles Martin.

The song "Glass Onion" is the Trope Namer for The Walrus Was Paul.