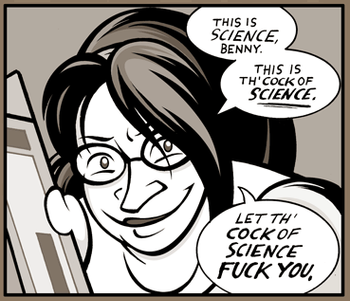 Reagan recommends the scientific method
Scipio: That is absolutely the most evil thing I've ever seen you do
Reagan: Bullshit. I ate that panda.
Scipio: That was not a panda and you know that was not a panda.
Reagan: I dunno, tasted pretty cute.
— Templar Arizona, chapter one "The Great Outdoors"
Advertisement:

is a long form full page sepia toned webcomic by the artist C. Spike Trotman. The comic takes place in a fictional version of Arizona, in a city that, if it existed in our world, would be in or near the Navajo reservation and has a that-world-only river, the Phocas, cutting through it that has been dammed upstream to the point of being non-existent in the town itself.

All of this and everything else shown so far has been heavily implied to be relevant. Someday.

Although the comic takes place in arguably a fantasy world it is better described as Alternate History, one in which perhaps a few wars didn't go the same way as they did here, but the base culture and the basic foundations of reality are the same as in reality.

Self described as an exercise in decompressed storytelling, it has an in-comic timeline of less than a month not including the flashbacks and the intermissions that take place at unspecified times in the Canon. The comic is available for free online and print editions that can be bought direct from Spike and, for now, through Diamond publishing. Templar Arizona has won Web Cartoonist Choice Awards for Character Design and Character Writing.

In 2015, the comic got knocked offline by technical problems and is yet to be restored.

The chapters so far released are: