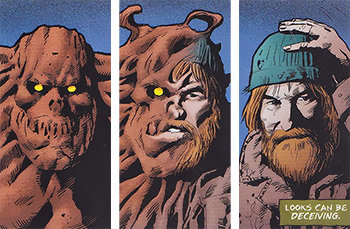 "So, wait, you didn't have any clothes on when you were a bat? Or were they bat-sized?"
— Jonathan, Hotel Transylvania
Advertisement:

Voluntary Shapeshifting is a handy power, but it has its limitations. Being able to make your face and body look like Alice is great, but it can raise suspicion if you're still dressed like Bob. Keeping a spare set of clothes around for every possible disguise you might need is a hassle.

Some shapeshifters don't have this problem, because they can actually form clothes out of themselves. If this kind of creature wants to disguise itself as, say, a police officer, they can form a police uniform, badge, belt, shoes, possibly even a gun out of the same stuff — usually Handwaved as some kind of proto- or ectoplasm, Nanomachines, or general biomass — as the rest of the shapeshifter's body.

If you think about it, this makes the shapeshifter technically naked, but the end result from an outside observer's perspective is more or less the same. It may not be the same for the shapeshifter itself, however: if it's the sort of creature that requires protection from cold and heat, for example, it's not going to get it if what looks like a warm jacket is actually its "skin".

Not included in this definition are cases of magical shapeshifting in which new clothes are conjured or existing clothes altered as part of the spell, or Applied Phlebotinum clothing that can change its form to match that of the wearer; in both those cases, the clothing is still a separate set of physical objects from the wearer. This trope specifically refers to cases in which a shapeshifter's "clothing" is contiguous with itself.

The inversion is Shapeshifting Excludes Clothing, which also includes sizeshifting, Baleful Polymorph, and various other methods of changing form besides Voluntary Shapeshifting. Sister Trope to Shapeshifter Weapon, which is when a 'shifter can form functional weapons out of its own body, and Invisible Streaker, whose nudity has to do with not being seen. Compare and contrast Clothing Appendage.

This hostage isn't what she seems.

This hostage isn't what she seems.