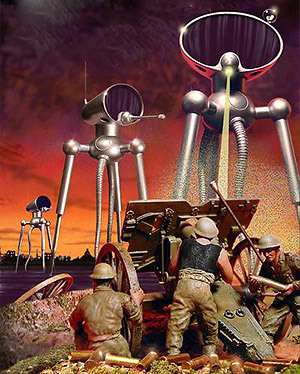 President Whitmore: Can they be killed?
Dr. Okun: Their bodies are just as frail as ours. These two died in the crash, the other a few weeks later. You just have to get through their technology, which is, sorry to say, far more advanced.
— Independence Day
Advertisement:

The type of enemy that completely outclasses you on a technological level.

This enemy is common in Alien Invasion stories, both large-scale (aliens from another world) and small-scale (aliens from another continent). Time travel often involves it as well; the Conqueror from the Future in particular abuses this to a point. The Mad Scientist is also this sort of enemy unless there is an equal intellect on the side of the heroes, especially if said Mad Scientist specializes in robotics, computers, or direct weapons.

Realistically, there's little you can do against an enemy like this short of completely outnumbering them or stealing their technology—and oftentimes, that doesn't work either.

Subtrope of Outside-Context Problem. See also Higher-Tech Species (when having the highest tech out of any group is their species hat), Sufficiently Advanced Alien (for when you're really outclassed) and Rock Beats Laser (when you manage to win despite your disadvantage).