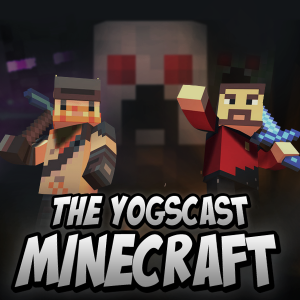 "We start off quite simple, but then, as you go along, things get more complicated."
— Simon, Part 5: "The Legend of Pig Island"
Advertisement:

The Minecraft Series is a catch-all description for the Yogscast content based around Minecraft. It started as a Let's Play of the sandbox game Minecraft with Lewis and Simon on the flagship BlueXephos channel. However, after a few unusual events and weird encounters with a mysterious character named Israphel it grew into an ambitious machinima series.

From late 2010 through early 2012, the bulk of the Minecraft series was composed of a semi-improvised comedy drama, where Lewis and Simon "play" the parts of a Xephos, a heroic "Spaceman", and Honeydew, a mighty dwarf, respectively. The series is set in the fictional land of Minecraftia, where Xephos and Honeydew encounter a range of colorful characters, and, by virtue of their talent and skill (or a succession of lucky flukes), become worshiped as mighty heroes by the citizens of the land. This series is known Shadow of Israphel, though a survival multiplayer Minecraft and Survival Island series are generally considered to be a part of this series, with the BlueXephos channel lumping together the somewhat narratively linked series under the YouTube playlist "Minecraft Survival Multiplayer/ SoI

Other videos in the series include custom map play throughs, series showcasing Minecraft mods such as YogLabs, and Minecraft update coverage. There have also been series based on the a custom Minecraft mod pack using the Feed the Beast launcher called YogCraft (transitioned from Tekkit), described as "a little bit like Tekkit, a little bit like Feast the Beast, but it's YogCraft", featuring Duncan and Sjin and a whole lot of other members across several channels as well as Voltz, focusing on the team of Lewis/Duncan (and later Simon) and Sips/Sjin (and later Ridgedog), a mod pack based around the Galacticraft mod mostly used by Lewis, Simon, Duncan, Sips, Sjin and Kim, the Yogscast Complete mod pack with several members (based on Resonant Rise) and a Survival Minecraft series with Sips and Sjin.

In 2014, a comedic series of animated sketches featuring the voices of Ross and Trott (along with archival footage from the older series) called Israphel Animated was started. This ostensibly shows what Israphel and his skeleton minion was doing to defeat Lewis and Simon while Lewis and Simon were off playing other Minecraft mods.

Tropes pertaining to the Tekkit, later changed to YogCraft on the same server, series on the main Yogscast channel, featuring Simon, Lewis & Duncan. The series follows the progress of the three working as Honeydew Inc. for the most part to create and run a Jaffa Cake factory. The series also prominently features SipsCo, Sips and Sjin, firstly as a rival company but later they join with the other three in order to help out.

The second Tekkit/YogCraft series featuring Sips and Sjin following the series based on "Stacy Island". In this series, the two slowly try to build and run a Sipsco dirt factory and other nearby facilities, in between a lot of meandering talking. Had a short-lived stint when the Tekkit server updated to YogCraft; however, because so many mechanics were rendered useless, Sips and Sjin abandoned it, and in September 2013, they rebooted the series and started a new factory from scratch on a private server.

This series is about Sjin setting off on his own to fulfill his life long dream of building a farm. The series has essentially been ended by the Heartbleed patch for the launcher, but will continue into "Sjin's Farm" in the Yogscast Complete mod pack.

This series is mostly a tutorial/Let's play of Tekkit, later the modified Feed the Beast launcher, YogCraft, showcasing the mod with occasional deviations into the plotlines present in the other series.

Formerly "The Tekkit Chronicle". Arguably the most plot led of series, it follows Rythian, Zoey and Teep the mute dinosaur.

A more recent series featuring Kim learning to play on the Yogcraft Server from the other established players.

Tropes across all series

Tropes which span the series or are present in some of the shorter series such as Nilesy's & Hannah's, Martyn & Toby's, and the Rail Bros. series.
Voltz
Galacticraft/MoonQuest

A continuation from the Chaosville server's Solutions in Chaos. Reunited after their separation as the end of the prior series, Parvis talks a reluctant William Strife into teaching him blood magic after Martyn bluntly refuses to even touch the stuff in Heroes of Mine.

Hannah and Nilesy return to the server, to find that pirates have invaded Owl Island.

InTheLittleWood's first venture into a Minecraft series on the Yogscast Complete Pack (Yogpack) server, following a short-lived Tekkit series. It began as a lone venture, but he brought in Parvis in episode seven because trying to play alone without someone to bounce of was, to quote "numbing his brain". The goal of the series is to kill/capture every single hostile mob in Yogpack.

The sequel series to Feed the World that takes place in the Yogscast Complete server, owing to the Heartbleed patch corrupting the previous farm. This show stars Sjin "expanding" his farm by purchasing a new deed and starting from scratch with Lewis.

After the end of Solutions in Chaos, Strife returns to his content roots in the form of what is essentially a guide to Minecraft Yogspack, while also creating the Strife Solutions Business Park. Occasionally he wanders off to visit Parv in Blood and Chaos.

After the somewhat disastrous end of Jaffaquest, the gang move to a new location, taking all their supplies with them to start afresh.

After his return from the moon, Sips decides to relaunch Sipsco yet again, this time hiring Lewis and Turps as assistants in making a new Dirt Factory.

Duncan and Sjin, believing that magic is evil if certain variations are left unchecked, decide to essentially become "police" for magic for the server.

Simon, Hannah and Kim assemble to take down several monsters in the Twilight Forest.

A series in which the Yogscast- including Simon, Lewis, Duncan, Sips, and Sjin- must care for a giant sky whale while they wait for their captain to return.

A series in which various members of the Yogscast (plus one or two friends) elect a mayor every week, who then divides up tasks for everyone to work on.