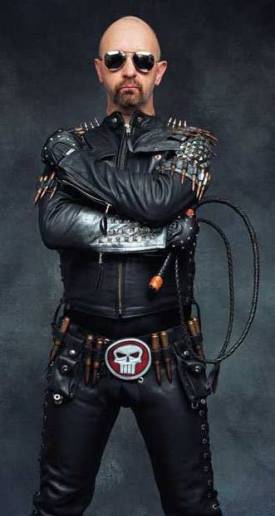 The Trope Namer, black as night, faster than a shadow.
"No cow ever died for a nobler cause."
— Dave, Drop the Dead Donkey
Advertisement:

There's a reason we call the trope "Draco In Leather Pants". There's something about tanned cow hide (or its synthetic or plant-based equivalents) that's cool and extremely sexy to many people.

It will be black leather the vast majority of the time. Other colors just don't have the same effect in most cases, though white and red do sometimes work, as does the traditional brown. For increased badassery, have the black leather lit by a sodium lamp: Black leather, deep green highlights.

This is also a common trapping of historical epics and fantasy, as clothing made from leather is percieved as being more old-fashioned and primitive. All kinds of leathery gear is also presented as armor, since it looks cool, can be put together pretty easily by the costume department, may be less uncomfortable for actors to wear than the alternatives, and is well-accepted by audiences thanks to decades of The Coconut Effect. There are real examples of leather clothing and armor in certain times and places throughout history, but Hollywood Costuming is par for the course. The popularity of leather clothing and armor in a historical setting is often hugely exaggerated; designs may be anachronistic or completely fictitious; and modern forms of tanning and coloring may show up. Furthermore, items made from soft or flimsy pieces of leather are treated as armor when they'd do nothing to resist blades or arrows in real life. Actual leather armor was often thick, heavy, and specially treated to harden it. Not exactly your casual leather jacket.