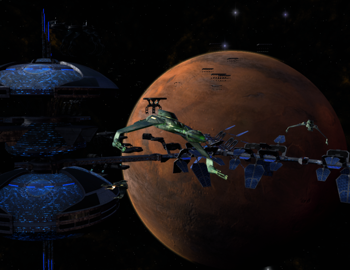 is a Star Trek Online fanfic by StarSword, adapting part of the Klingon Defense Force mission "Second Star to the Right, Straight on 'til Morning"

into a Military Science Fiction novella. It takes place in the same slightly altered Verse as his other STO fic Bait and Switch. The fic has multiple third-person limited narrators, with subtle changes in tone and word choice for each.
Advertisement:

On March 2, 2409, Lieutenant Commander Brokosh of the Klingon Defense Force and the Ragtag Bunch of Misfits on his command crew lead several Birds-of-Brey on a raid deep into the Sol System. Their target: Utopia Planitia Fleet Yards.