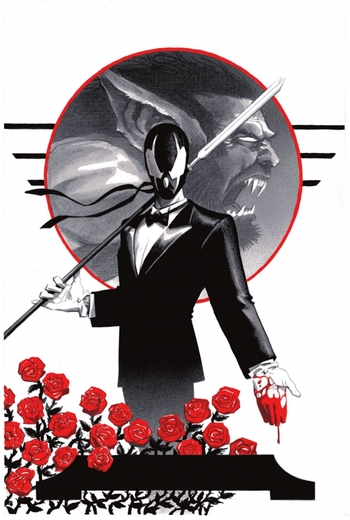 Grendel is a comic book series created by Matt Wagner. The titular character first appeared in the anthology title "Comico Primer" #2 (1982). He held his own short-lived black and white series (1983-1984), and also appeared as back-up strip in "Mage" (1984-1986). Before launched in an original full-color series, lasting from 1986 to 1990. Various mini-series featuring Grendel regularly appeared through the 1990s. Reprints and some new material have continued appearing in the 21st century.

The initial subject matter concerns one Hunter Rose, who is a bestselling author, a sophisticated gentleman who attends high class parties. He's also Grendel, a ruthlessly efficient assassin who slowly takes over all the mobs in New York City. Matt Wagner's stories of Grendel are noir tales, black and white and red only. They are not only tales of a criminal mastermind, but a study in aggression.

Along the the way, Grendel comes across two other important characters: Stacy Palumbo, a young girl whom Hunter adopts after he kills her father, and Argent the Wolf, a cursed werewolf who works with the police to stop Grendel. At the end of the first Grendel story, Devil by the Deed, Stacy, who has found out Hunter is Grendel, manipulates both Grendel and Argent to fight on a rooftop, where Grendel dies.

However, this is not the end of the story; the series proper is set in the future after the conclusion of Devil by the Deed, initially featuring Stacy's daughter Christine Spar. The story then continues in the far future, where the concept of Grendel eventually becomes the basis of world civilisation, with its avatar Grendel Prime.

A slightly-retconned Grendel Prime stars in the more recent series Devil’s Odyssey, a space opera homage to the 1980s Heavy Metal magazine and other SF works. It is a significant tonal shift from the earlier series, closer to true parody.