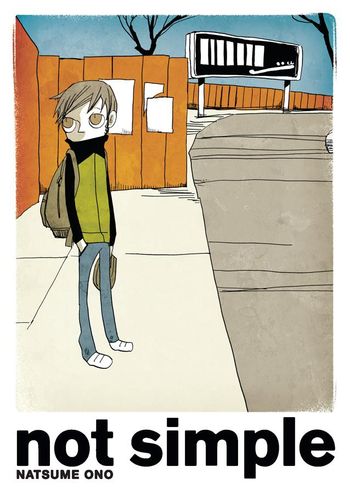 Not Simple is the tale of a young man named Ian, who has spent the majority of his life in search of his older sister, whom he hasn't seen since childhood. His journey takes him from his birthplace of Melbourne, Australia, to faraway England, to several cross-country trips on foot across the United States. Each new and often painful twist on which these travels take him are chronicled by Jim, a freelance journalist and Ian's only friend.

It lives up to its title, telling the story of Ian in a unique and complex fashion by jumping back and forth across various times in his life as Jim writes the young man's strange and tragic tale. The manga is written and illustrated by Natsume Ono (House of Five Leaves, Ristorante Paradiso). As with Ono's other works, Not Simple is notable not only for its quirky art style, giving the series a more western look when compared to most modern manga, but also for its mature and hard-hitting story. The manga was originally published in 2006 by Shogakukan, and was licensed for an English release in 2010 by Viz Media.