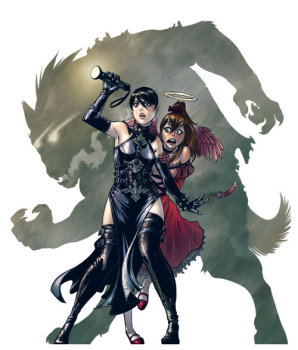 Freaks' Squeele is a French series of comic books created by Florent Maudoux and published by Ankama. The series is unique in its graphic style, mixing manga, American comics and classic FrancoBelgian comics style.

The story follows the adventures of three students in a university for Heroes (the F.E.A.H.), specializing in Bad Guys and Villains. It is fair to say they may not be the brightest element of the classes. The team consists of Chance, an adorable clumsy demon-girl; Ombre de Loup (Wolfshade), a big-hearted lycanthrope stuck in his animal form, and Xiong Mao, who has no superpower whatsoever apart from being a relentless worker.

There are several spinoffs, such as Rouge (about teenage Xiong Mao), Masiko (about her mother) and Funérailles, which is set in a fantasy world and is about the youth of the titular character and his brother Scipio.