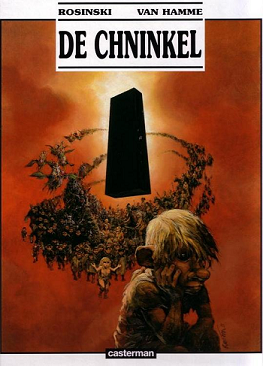 "Your fate has been determined, J'on...thanks to you the world will be at peace.
How excited you must be at the beginning of a new era, which will be the greatest of all."
Advertisement:

Le Grand Pouvoir du Chninkel (alternatively known as The Great Power of Chninkel, De Chninkel, Szninkiel, or Chninkel and the Great Might) is a comic by Jean Van Hamme and Grzegorz Rosinski. Published in 1986, the comic is an allegory of Christianity that deconstructs many of the tropes found in hero myths with a dark sense of humor.

In the story, the land of Daar is constantly ravaged by war as the three immortals battle for dominance. O'ne the Creator, tiring of this, grants former slave and chninkel J'on a Great Power in order to bring peace to the world. If Daar isn't tranquil by five sun-meetings, the world will be destroyed.

Le Grand Pouvoir du Chninkel was critically-acclaimed but did not sell as well as Van Hamme's other works. The comic, originally in Belgian French, was translated into Polish (the illustrator's native language) and Dutch. It has yet to receive an official English translation, but fan scanlations can be found floating around the Internet.

The Great Power of Chninkel provides examples of: