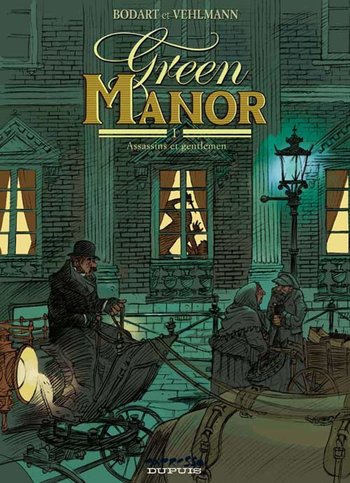 "A cup of tea? A drop of milk? A spoonful of poison? At first nothing would make very select club called Green Manor stand out from any other English club. Yet behind its thick walls, sunk into its deep chairs, hides the biggest bunch of con artists, bandits and murders that Queen Victoria's England has ever seen."
— Synopsis
Advertisement:

Green Manor is a Franco-Belgian comic made by Fabien Vehlmann as a writer and Denis Bodart as the artist.

It concerns the secrets inside the eponymous Smoky Gentlemen's Club told by an old man named Thomas Below who suddenly went insane just before his retirement.

Christopher Thorn, a renowned professor in the field of psychology is asked to study the old servant and is told the Dark Secrets that lie in the manor.