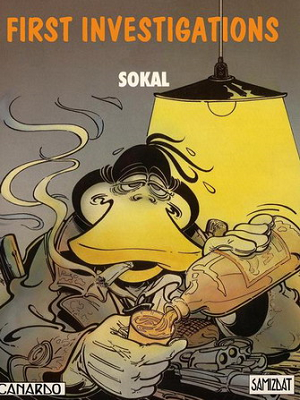 Inspector Canardo is a long running comic series written and drawn by Benoît Sokal. The eponymous protagonist is an antropomorphic duck Defective Detective Anti-Hero, who often treads on the gray areas of justice while trying to cope with the problems of a world populated by Funny Animals.

The first stories were published in the late 1970's. They were short episodes with a loose continuity, published in the comic magazine A Suivre. The comics were satirical in tone and parodied Film Noir detective movies heavily, but gradually Cerebus Syndrome got hold on the series and started shaping it towards its current form.

Sokal started writing longer Canardo stories in 1980's, resulting in the first Canardo albums. They established a more stable continuity and started to focus more on tense plots than parody. Over the course of 30 years, 19 albums of Canardo's (mis)adventures have been published.