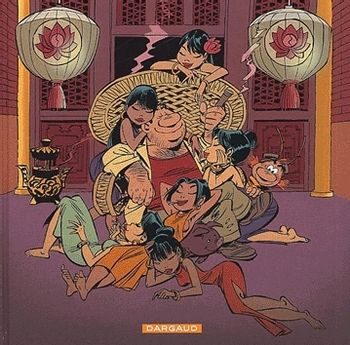 The big guy is Mac, the short one is Tim. Tony is probably sulking in a corner somewhere.
Advertisement:

Les Innommables is a French-Belgian comic book series by Yann Le Pelletier and Didier Conrad. It tells the adventures of a trio of deserters from the US Army, McButtle a.k.a. Mac, Tony and Tim, who wander throughout post-WW2 Asia, looking for a quick buck and for Mac's one true love, a Chinese girl named Alix Yin Fu. The latter is a fanatically committed agent of the Chinese Communist Party and goes through numerous adventures in her own Spin-Off series, Tigresse Blanche.