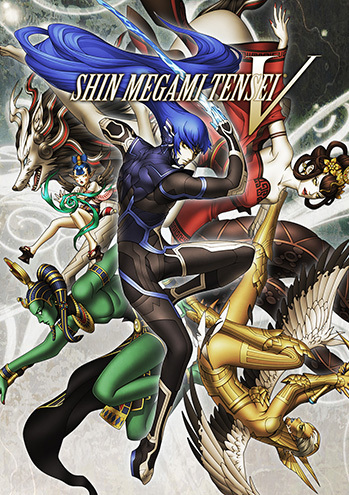 The time for Creation has come. note Clockwise from the top: The Nahobino, Nuwa, Abdiel, Khonsu, Amanozako, Hayataro
"The God you cravenly revere is dead. [...] Order itself has crumbled. Chaos shall envelop the world... and from that chaos, there shall be a true rebirth—a wholly new future. All that remains is for me to sow the seeds that shall sprout into this grand reality."
— Lucifer
Advertisement:

Shin Megami Tensei V is a Post-Apocalyptic Urban Fantasy RPG, and the fourth Numbered Sequel in Atlus's Shin Megami Tensei franchise. Kazuyuki Yamai, director of Shin Megami Tensei IV, returns as the lead producer. SMT V is the first game developed by Atlus on the Unreal 4 Game Engine. The game had a simultaneous global launch (another first for an Atlus game) over November 11-12th, 2021 for Nintendo Switch.

You play as a third-year Ordinary High-School Student in Tokyo, Japan, who one day on his way home from school finds himself accidentally drawn into an alternate, After the End Tokyo overrun by angels, demons, and gods following the death of the world's Creator, called "Da'at". A pack of bloodthirsty demons soon attacks the protagonist after witnessing a classmate taken away by Angels, and in order to survive accepts the help of a mysterious god named Aogami. In the process, the two fuse to become a "Nahobino", a forbidden being that is neither human nor demon. Now, as the ambitions of gods and man clash amidst the horror of a dying world, the newly-forged Nahobino and his friends must decide what is worth saving, and prepare to sacrifice everything in its name. In a world without its Creator, which path will you choose?

Godhood awaits. Go and claim it.