Video Game / Shinsekai: Into the Depths 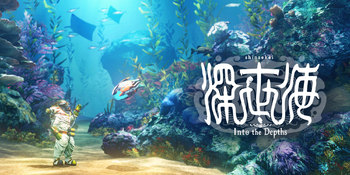 In the distant future, a cataclysmic frost has forced humanity to take refuge into the ocean. Thanks to the ever-expanding frost, society has fallen into decay, but a single adventurer known simply as the Aquanaut discovers a mysterious drone-like machine on the surface world, and that discovery may lead to a new discovery for a new chance of life.

Shinsekai: Into the Depths is a 2D Metroidvania game developed by Capcom and originally released on September 19, 2019 for iOS as a launch title for Apple Arcade with a Nintendo Switch version releasing on March 26, 2020. Uniquely the game take place entirely underwater so along with the usual Metroidvania elements of exploration and combat, the Aquanaut must also take the time to manage their ability to breathe underwater and also not succumb to the undersea pressure.

Shinsekai: Into the Depths contains examples of