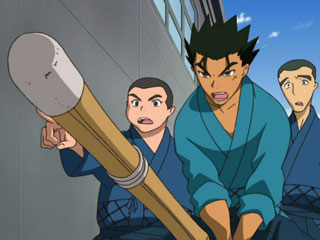 No, Takeda isn't just happy to see you.
Advertisement:

Any Japanese school worth its salt has a Kendo team, and any school at which the Kendo team gets significant on-screen time will have a rather good one. At such a school, the Club President of the kendo team will usually be an important character of some sort. He or she (usually he, but women are showing up more often in this role, and are usually Shorttank or Defrosting Ice Queen types) is generally sempai to the Kid Samurai, a True Companion to the Student Council President, and possibly The Rival to the Heir to the Dojo.

One aspect of this trope that may not be immediately apparent to Western audiences is the social ranking of after-school activities. A rough equivalent would be the status hierarchy that exists in American high school sports. Kendo, as a traditional martial art and one that requires a good deal of strength and dexterity, is a club with high social status, thus the usual prominence of its club president.

Most likely the Big Man on Campus. If he serves as The Ace or another character's Always Someone Better, see School Idol. If he's a Jerkass, see Jerk Jock. If there's one in the club, the Cute Sports Club Manager is his most likely Love Interest.

Sometimes, the Kendo Captain will be replaced with Judo or Karate captain, depending on the school and other factors.

The closest Western counterpart would probably be The Quarterback in American High School series or a soccer team captain in an European or Latin American series.

Compare Heir to the Dojo.