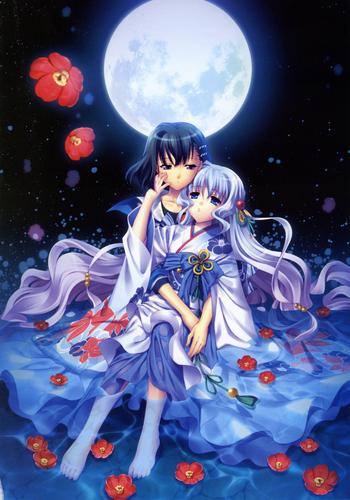 Nami and Osa
Floating towards the water's surface
The string of fate draws us there
There is no need to fear
What tomorrow holds
If the two of us are together.
— Minamo Made (To the Water's surface)
Advertisement:

Aoi Shiro (アオイシロ), also known as Blue Castle in English, is a supernatural Girls' Love mystery visual novel created in 2008, that takes place within the same universe as Akai Ito, also made by Success.

This time the protagonist is a girl named Syouko Osanai, the new captain of the school kendo team. The kendo team goes to a temple for a training trip, but things start to get strange, especially when Syouko seems to remember coming to the place some time ago...

Originally for the PlayStation 2, Aoi Shiro was eventually ported to the PC in 2009, and even later, in 2016, was ported in an all new format to mobile.