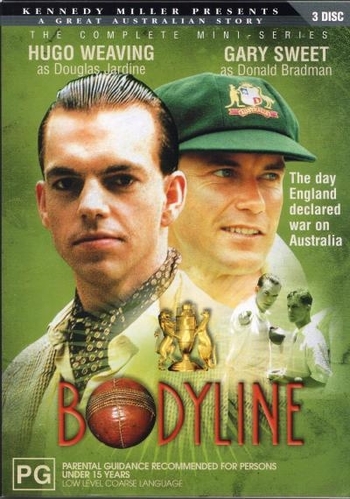 Australian TV miniseries from 1984, retelling the story of the "Bodyline" cricket series from 1932-33. The English team had developed an unusual — and highly dangerous — tactic to counter the seemingly unstoppable Australian batsman Don Bradman. Bodyline involved bowling very fast and short, bouncing the ball toward the batsman's shoulder, and keeping several fielders close in behind him to catch him out if he attempted to play it. Several players were struck and injured, and the violence of the tactic nearly caused a diplomatic incident between England and Australia.

Takes its time, particularly at the beginning; the first episode is more or less an extended prologue. The first match of the series doesn't even start until episode 3. But while it takes a few liberties with the facts, it's very good at setting the historical scene. Stars Hugo Weaving as English captain Douglas Jardine.

Plot summary to be added.