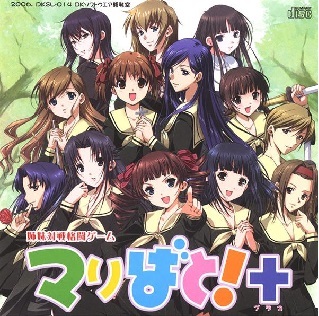 Maria Watches Over Us!

Maribato! is a doujin Fighting Game developed in 2004 by DK Software, based on the Light Novel Maria Watches Over Us.

The game features the students from Lillian Girls' High School as playable characters, and all of them sport quirky yet very funny and interesting moves and styles, most of them as references to other fighting games, or aspects from the light novel. It is a Tag Team Fighting Game in a similar vein to the Capcom Crossover games, where you can pick a team of two soeursnote Sisters, and go against another group of two. Gameplay-wise, it uses three buttons: Two attacks (Weak and Strong), and a third button to change to your partner. Each girl has their own Life Meter, however, if one of the girls is defeated, the entire team loses, unless you somehow manage to change characters just in time, the other girl can continue the fight even if her soeur is down.

An Updated Re-release called Maribato! Ver. 2.0 was presented in Comiket 70 in 2005 as a standalone disc. it adds two new characters in addition to the existing eight ones, as well as new stages; And later, in 2006, a third revisión of the game, called Maribato! Plus was released: It adds three more characters, stages, and makes a big rebalance of everyone.