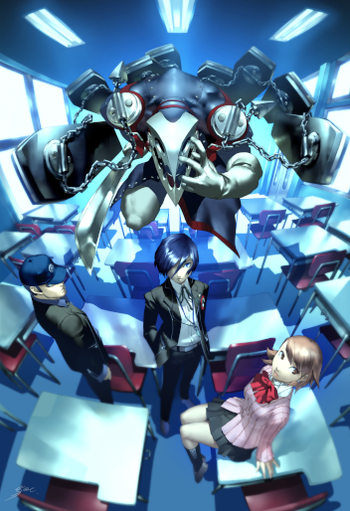 I will burn my dread.note From left to right: Junpei, the Protagonist, and Yukari. In the back: your personal Guardian Entity, Thanatos.
Death is not a hunter unbeknownst to its prey.
One is always aware that it lies in wait.
Though life is merely a journey to the grave,
it must not be undertaken without hope.
Only then will a traveler's story live on,
cherished by those who bid him farewell.
— Igor, Master of the Velvet Room
Advertisement:

Persona 3 is an Urban Fantasy Role-Playing Game, and the third numbered sequel in the Shin Megami Tensei JRPG franchise's Persona sub-series, developed by Atlus for the PlayStation 2 and later the PlayStation Portable. It released in Japan on July 13th, 2006, in North America on August 14th, 2007, and in Europe on February 29th, 2008.

Every night when the clock strikes midnight, a phenomenon called "The Dark Hour" occurs. During this "hidden" hour of the day, Colour-Coded Timestop and normal humans are transmogrified into coffin-like objects, unaware of the world around them. What's more, evil creatures called Shadows appear to prey on the minds of humans, inflicting a zombie-like condition commonly known as Apathy Syndrome.

You are a New Transfer Student moving to Tatsumi Port Island to attend Gekkoukan High School. Soon after settling into your new dormitory, you are discovered to have "the potential": the ability to remain as a human within the Dark Hour, and to fight the Shadows with a mysterious inner-power called "Persona". Recruited into the Specialized Extracurricular Execution Squad (SEES), a secret student society dedicated to fighting the Shadows, you now have to balance your school life, your social life and your new demon-hunting life.

The game is split into two main sections: "Day" and "Dark Hour". During the "Day" sections, your main goal is to attend school and build up friendships with the people around you, known as "Social Links". As the strength of your Social Links increases, so do the power of the Personas that you can use in the "Dark Hour" section. When not attending school you can do other things like seeing movies, hanging out at the arcade or even getting a part-time job, which all increase your Academic, Charm and Courage stats so you can improve your Social Links further.

The "Dark Hour" section is a dungeon-crawling RPG with random-generated dungeons and a turn-based battle system. Your main goal is to advance up the floors of Tartarus, a mysterious Evil Tower of Ominousness that only appears during the Dark Hour and seems to hold the key to the mystery of the Shadows. The battle system itself is called "1 More!", a stripped-down version of the Press Turn system from Shin Megami Tensei III: Nocturne and Digital Devil Saga. If you hit the elemental weakness of an enemy, you knock it down and are immediately awarded an additional action. Furthermore, knocking down all the enemies in the group allows you to perform an "All-Out Attack", which hits every enemy for major damage. However, the enemies are also awarded additional actions for knocking you down.

An Updated Re-release, Persona 3 FES was released for the PlayStation 2 in Japan on April 19th, 2007, in North America on April 22th, 2008, and in Europe on October 17th, 2008. It includes an extremely difficult epilogue chapter called "The Answer," more Personas, additional story events in the game, and a Hard Mode. This version has since been rereleased on the Play Station Network as a PS2 Classic.

A Video Game Remake, Persona 3 Portable, was also released on the PlayStation Portable in Japan on November 1st, 2009, in North America on July 6th, 2010, and in Europe on April 28th, 2011. Alongside its Visual Novel-esque style, it also incorporates many of the gameplay improvements featured in Persona 4note such as the ability to Guard and directly control your party members, includes five difficulty levels (including the Harder Than Hard "Maniac" difficulty) and adds the option to choose a female protagonist, which provides a different take on the game's plot. It also includes a few Call Forwards to Persona 4, but lacks the epilogue chapter featured in FES.

open/close all folders
Tropes A & B
Tropes C & D
Tropes E & F
Tropes G & H
Tropes I-L
Tropes M & N
Tropes O-R
Tropes S & T
Tropes U-Z
Oh, I will run,
Burning all regret and dread...
And I will face the sun
With the pride of the living...