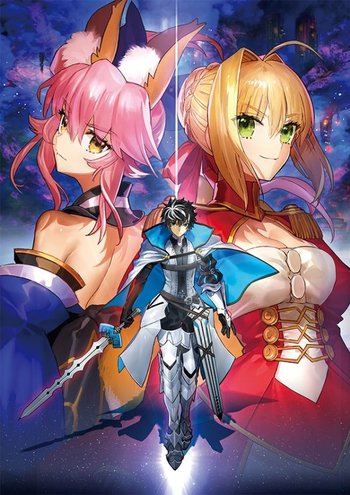 This is the story of the hero Charlemagne, why not take a seat and listen to his story?
The fourth game in the Fate/EXTRA series of the Nasuverse, Fate/Extella Link is a sequel to Fate/Extella: The Umbral Star, taking place after its Golden Ending. After the war between the armies of Tamamo-no-Mae, Nero Claudius, and Altera ended, peace has finally come to the Moon Cell. However, a new threat lurks in the distance as the young Altera mysteriously disappears...
Advertisement:

The game retains the musou style gameplay introduced in its predecessor and focuses on a new Saber, Charlemagne. In addition, the sixteen playable characters from the first game will also return to be playable. There have been confirmed to be ten new playable Servants to be added in this entry, with the aforementioned Charlemagne, Francis Drake, Astolfo, Scathach, Robin Hood, Arjuna, Darius III, Gilles de Rais, Lancelot, and Karl der Große. Notably, MONACA of Nier and its sequel fame composed the game's music.

It was released for the PlayStation 4 and PlayStation Vita in Japan on June 6th, 2018, in North America on March 19th, 2019, and in Europe on March 22nd, 2019 alongside worldwide ports to the Nintendo Switch and PC on Steam.