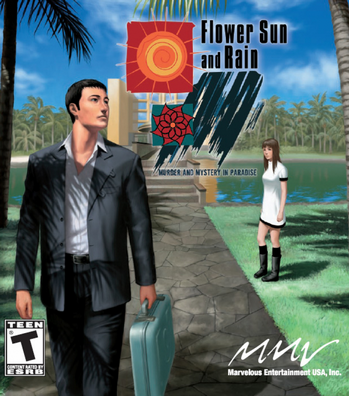 A mystery is concealed within this entry!
Flower, Sun, and Rain (known as Hana to Taiyō to Ame to in Japanese) is an Adventure Game developed by Grasshopper Manufacture and written and directed by Suda51 for the Playstation 2 in 2001. The game revolves around Sumio Mondo, a "searcher" who finds things using his silver briefcase/computer who he refers to as Catherine. Sumio has come to Lospass Island to take on a job by Edo, manager of the Hotel Flower, Sun, and Rain. Apparently, a bomb has been planted on an airplane by a terrorist, and Sumio must find it and defuse it. The next day, though, he becomes unwillingly sidetracked by forces out of his control, and the plane flies over the island and explodes.
Advertisement:

Sumio wakes up in his hotel room. Edo tells him he needs to get to the airport to stop the plane from exploding. Arbitrary sidequests, surreal dialogue, number puzzles, self-deprecation, player trolling and Mind Screw ensues.

Part of Suda's "Kill the Past" universe, along with such games as The Silver Case, The 25th Ward and (distantly) Killer7. A Nintendo DS port was released in 2008, which severely downgraded the graphics and sound; however, it is the only version of the game released outside of Japan.

(An airplane explodes overhead)
☆Welcome back☆What was that?☆An exploding aircraft?☆What in the world is going on on this work page?☆Please make sure to hurry to the end of the page next time☆I shall be waiting with a smile at the front desk☆
Continue to the next request...