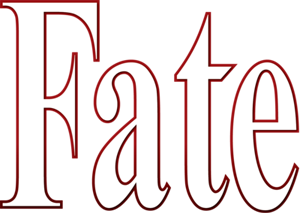 Fate is an Urban Fantasy action franchise, part of the greater Nasuverse created by Nasu Kinoko and Takeuchi Takashi. Originally just a series of self-contained material, the Fate franchise very quickly eclipsed the rest of Type-Moon's works and came into its own as a standalone series.

While concepts for the series came long before its debut in 2004 (including a literature version similar to Nasu's other works like The Garden of Sinners and Angel Notes), its first installment, Fate/stay night, was released as an Eroge during Comic Market 67. Lack of official translations meant it would be relatively obscure outside Japan, if it weren't for fans translating the game and its respective 2006 anime being officially brought over. Interest in the series surged when the animated adaptation of prequel novel Fate/Zero released in 2011, sparking a revival in interest for the original game and a wave of spinoffs and re-releases. The third surge in popularity was Fate/Grand Order, which launched in 2015 and has pretty much made the franchise a pop culture landmark in Japan for the late New Tens. While official translations for its other installments still remain few and far between, the community is dedicated enough to keep up with every installment as it comes out.

Fate's claim to fame is its use of the Holy Grail War, a ritual performed by mages to create and use the titular vessel to have their greatest desire granted, no matter how twisted it may be. Closely related to this is the Servant system, the ability to summon famous individuals from folklore and history, who are then used as the War's combatants. Servants themselves function how Mons would in a similar series, with the prerequisite class advantages, Master/Servant dynamics, and (especially in later installments) plenty of Servants to choose from. So much so, when Type-Moon did a Self-Parody using Pokémon as the basis, the only thing that changed was that kids were the Masters and could use more than one Servant. Originally, however, the Servants were merely reflections of their Masters, while the latter group was the real meat of the story. Nowadays, the Servants are what everyone focuses on, and the narrative importance of Master and Servant is reversed.

Keep in mind that the franchise doesn't have a completely straight continuity; in fact, many titles are in their own separate continuity, held together by the basic concept of the Grail War, the mage system, and the Servant system. Fate/EXTRA, for example, takes place years after the first game's Holy Grail War, but the game itself only takes inspiration from its outcome while going off into a completely different direction. Others, like Fate/Apocrypha and Fate/Requiem, are straight up in an alternate universe.

Works in the franchise: