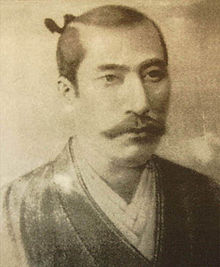 "If the cuckoo does not sing, kill it."
"Destroy everything equally."
Advertisement:

Credited as being the first of the Three Unifiers of modern Japan, Oda Nobunaga (June 23, 1534 - June 21, 1582) was one of Japan's most successful warlords. He started as a son of a minor daimyo (and earned the nickname "The Fool of Owari" due to his childhood and teenage antics), with a number of factions within his own province opposing him. Eventually, he would not only crush those factions but also proceed to conquer over a third of Japan, with the rest well positioned to fall to him. That ended on June 21, 1582, when his retainer Akechi Mitsuhide attacked him at Honno Temple; Nobunaga, his eldest son, his bodyguards and his wakashu, Mori Ranmaru, died that night. Summaries of his campaigns could be seen below.

Although noted for many things, including a mastery of tactics (most famously at the Battle of Okehazama: Nobunaga's forces, numbering at most 3000, defeated an army of around 25,000 through a combination of daring, misdirection, a brilliant surprise attack, and more than a little luck), revolutionizing the ways Japanese armies used firearms, and completely changing the economic system of and the way wealth was counted in Japan, Nobunaga is chiefly remembered for his ruthless and brutal nature, and it is these traits that dominate most depictions of him in any period pieces or games. Nobunaga's actions leave him ripe for playing the part of the villain, as his most infamous deeds include the burning of powerful Buddhist temples critical of him, and the slaughter of the thousands of men, women and children that lived in them. Even the kinder portrayals of him tend to show him as a man fueled by ambition and greed, in many others it is either speculated or explicitly said that he has either become a demon or made a literal Deal with the Devil to carry out his ambitions. See Demon King Nobunaga.

Although he did not live to see the conquest of all Japan finalized, Nobunaga's actions all but ended over a century of near-constant civil war among the lords of Japan for dominance. After his death, his general Hashiba Hideyoshi (later known as Toyotomi Hideyoshi) finished the conquest, and another general, Tokugawa Ieyasu (also his in-law, as Nobunaga's daughter Tokuhime married Ieyasu's son Nobuyasu), founded the Tokugawa shogunate that ruled Japan from 1600 until 1868.

Amusingly enough, his most famous descendant, Oda Nobunari, is one of Japan's top male figure skaters, and is most known for crying at the drop of a hat, and getting caught driving his moped drunk. He has a cameo in an episode of Yuri!!! on Ice, playing himself as a commentator.

In fiction, he is almost always a Big Bad, Evil Overlord and 0% Approval Rating dictator who receives a Historical Villain Upgrade. Even when he's not getting the villain upgrade, he's at best an eccentric pragmatic Anti-Hero who sees the old traditions as outdated and wants to sweep them aside to pave the way for the future (which, considering the abundance of traditionalists back then, made him stand out or considered an oddball). Furthermore, expect him to embrace everything that would modernize warfare and the country, complete with having no qualms about utilizing foreign goods/help (a big part of Nobunaga's success was his unprecedented use of muskets, and unlike his successors he was rather open to Jesuit missionaries), and being fully willing to engage in some necessary brutalities. Also probably a reason why the name "Nobunaga" is rare in Japan these days.

Notable Campaigns of Nobunaga and the enemies he faced.