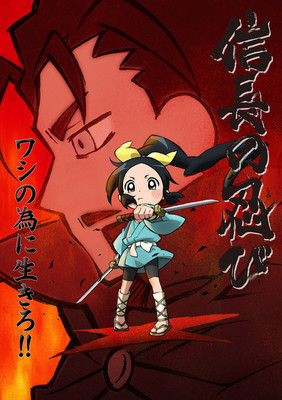 Ninja Girl & Samurai Master ( org. Nobunaga no Shinobi, lit. Nobunaga's Shinobi) is a yonkoma series created by Naoki Shigeno which began serialization in Hakusensha's Young Animal magazine in 2008. It later got an Animated Adaptation by TMS Entertainment that began airing as part of the Fall 2016 Anime lineup. The series is available for worldwide streaming on Crunchyroll here

The series takes place during the Sengoku Period and stars a young ninja girl from the Iga clan called Chidori. When she was young, she slipped into a river and almost drowned but was saved thanks to the warlord Nobunaga Oda. On that day, she swore that she will serve Nobunaga one day. Five years later, she and another ninja named Sukezo are sent to serve Nobunaga. Comedy ensues, as Chidori does her best to help Nobunaga to achieve his goals to unite all of Japan.