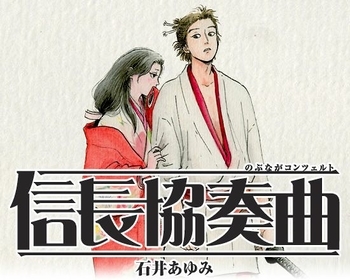 Nobunaga Concerto is a manga written by Ayumi Ishii, which first spawned an anime that aired on July 12, 2014. It follows a young teenager named Saburo, who gets sent back in time to the Warring States period of Japan. He crashes into a young nobleman fleeing to the countryside because he is sickly and can't bear the stress of being the heir of the family. Since the two bear an uncanny resemblance to each other, Saburo ends up taking his place in the family.

As it turns out, the young nobleman happened to be Oda Nobunaga, the first great unifier of Japan, and whom Saburo believes to have conquered and united the entire country (which he didn't). Through charisma, talent and sheer dumb luck, Saburo manages to piece together history as it was, all while navigating the tricky diplomacy and politics of Sengoku Japan without any idea of what he's actually doing.

The anime features an all-star cast, including Mamoru Miyano as Saburo, Yūki Kaji as Oda Nobunaga/Akechi Mitsuhide, Yūichi Nakamura as Toyotomi Hideyoshi, Nana Mizuki as Kichou, Nobunaga's wife, and Takahiro Sakurai as Takenaka Hanbei. A live action drama in October 2014 also aired with Shun Oguri as Nobunaga, and a movie conjoined with the drama was released in December 2015. Note however, that the drama is only very loosely based on the original story and features a number of major deviations in characterization and story.

Tropes present in Nobunaga Concerto include