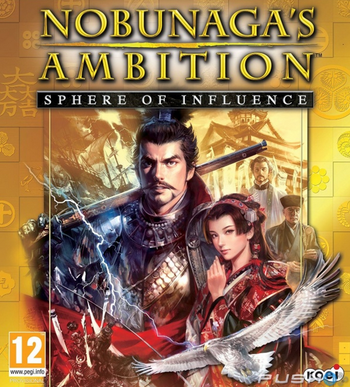 Nobunaga's Ambition is a strategy game series made by Koei, the first installment being released in 1983. The game puts you in the role of a daimyō in Sengoku-era Japan, your goal being to unify the country and earn (or with one clan, keep) the title of Shōgun. As long as this series remains largely unchronicled in the West, the article

on Wikipedia has a brief history of the series you might find relevant. Fifteen main-series games have been released in Japan, scattered across an army of platforms.
Advertisement:

A crossover game titled Pokémon Conquest, featuring elements from Nobunaga's Ambition and Pokémon, was released by Nintendo and Tecmo Koei on March 17th, 2012 in Japan. Fans went wild, especially from the Pokémon side of things, possibly due to the Darker and Edgier crossover aspects.

Not to be confused with The Ambition of Oda Nobuna, which has nothing in common except the Sengoku period setting.