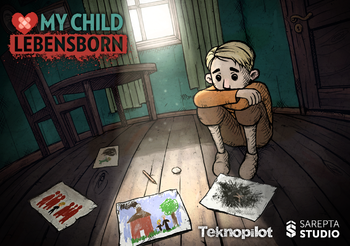 Wars can make new victims long after they officially end.
"What is a… 'Nazi-kid'?"
— Klaus/Karin
Advertisement:

My Child Lebensborn (sometimes punctuated as My Child: Lebensborn) is a story-driven Raising Sim set in post-World War II Norway. The narrative aspect is based on the childhood of people who were born as part of Nazi Germany's local implementation of the Lebensborn program and grew up being stigmatized because of their origins. It was originally released as a mobile game in 2018, and was ported to other platforms, including PC and consoles, in 2021.

During World War II, Norway is one of many countries occupied by Nazi Germany. Due to many of the locals having the physical features desired for Germany's Lebensborn Super Breeding Program, many German soldiers came to father children with local women. When the war ended and the occupying forces left, a significant number of the Lebensborn children were left with now-single mothers unable or unwilling to care for them, resulting in them being put up for adoption.

The game puts the player in the shoes of a single adult who has chosen to adopt either a little girl named Karin or a little boy named Klaus with the full knowledge that the child’s biological father is a German soldier. For the following three years, the Player Character and their child grow into a loving family. However, the child’s origins become much more relevant to their everyday life when they start school soon after turning seven: their classmates start bullying them for being the product of the Nazi occupation and adults are turning a blind eye when they are not engaging in ostracization of their own. It soon becomes clear that the child’s only true support is their adoptive parent, making it almost entirely up to latter to ensure that the child stays optimistic, assertive and open in spite of the situation. Unfortunately, the right parenting choices are far from obvious when any effort to do right by the child can potentially backfire because of the community’s hostility towards them.

The game covers most of Klaus or Karin’s first year in school, during which the child will need to be parented, fed, kept clean and entertained. Accomplishing the tasks helping towards those goals consumes time units, of which there is only a handful available each day.

was announced in 2021, provisionally titled My Child: New Beginnings