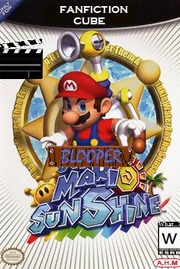 Mario: Why can't I just get a gun and shoot the crap out of him?
FLUDD: Because that would be easier.
Mario: And easy is bad?
FLUDD: No. Easy is good. Which is why you can't have it.

(known as AllHailMario at the time this fanfiction was written).

It follows Mario, Peach, Toadsworth, and a few other Toads, who are on Isle Delfino for a vacation. Unfortunately, after meeting a mean-spirited water pump named FLUDD (Fake Lying Unuseful Dumb Dud) and defeating a Polluted Piranha Plant with a four-month-old raisin, Mario is arrested and held responsible for the pollution covering the island, which drove away all of the Shine Sprites. Now he, with the unreliable help of FLUDD, is forced to clean the island and find all of the Shine Sprites. Hilarity Ensues.

This Fanfiction contains examples of: