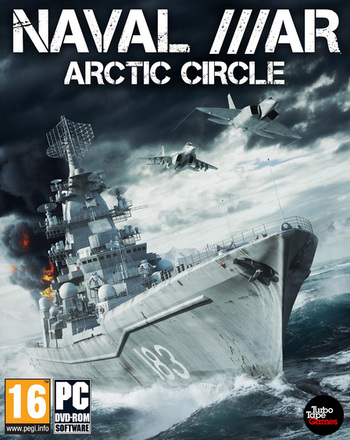 Naval War: Arctic Circle is a Real-Time Strategy game devoted to naval combat, made by Turbo Tape Games and published by Paradox Interactive for PC in 2012. The game is best described as Harpoon-lite, and features a combination of a 2D map and 3D unit view, which can be toggled to suit the player's preferences.
Advertisement:

The game takes place sometime within the 2030s, and features a conflict between Norway and Russia, who are disputing fishing rights. Tempers rise after a Russian patrol boat fires on a Norwegian fishing boat, and after Norwegian forces seize a faulty Russian oil tanker, the Russians declare war. With the US Navy concentrating on the Chinese in the far east, and the Germans and French sitting this fight out, it's now up to Norway and a few allies to take the fight to the reawakened Russians...

As of 2013, both Turbo Tape and Paradox have ceased supporting the game. However, the game's source code was also released the same year, allowing the game's community to continue playing and modding.