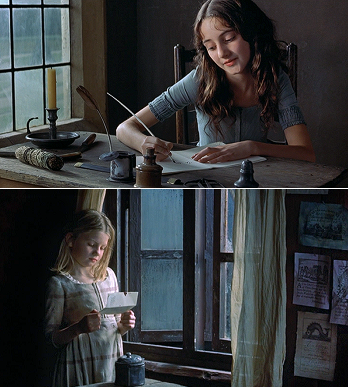 "Letter writing can be seen as a gift because someone has taken his/her time to write and think and express love"
— Hon. Soraya Diase Coffelt
Advertisement:

Writing is one of the oldest forms of long distance communication. Unlike the oral tradition form of communication which came before it, writing is not ephemeral; words on a page or tablet or screen don't fade from memory as easily as spoken words. Written words are eternal. As such, there is something deeply intimate or personal about writing letters back and forth.

This is even applicable to modern forms of written communication, such as email and text messages.

Supertrope to Unseen Pen Pal, which is about a pen pal relationship in which one or both parties are unaware of what the other looks like, usually due to them having never met in person.

Not to be confused with the Sharon Dennis Wyeth series or the Star Trek: TNG episode of the same name.