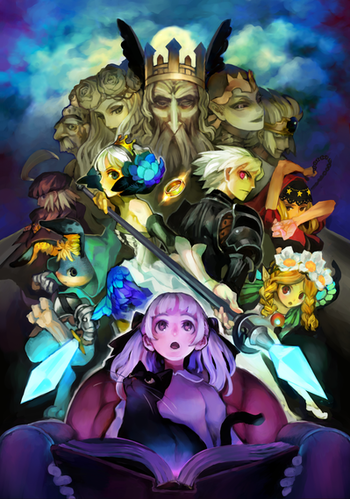 War will spread across the world.
The winning country will rule over the entire land.
That accursed cauldron served as a trigger.
It is cataclysm's womb, and it should not exist.
— Velvet
Advertisement:

Odin Sphere is an Action RPG published by Atlus and developed by Vanillaware, released in the late end of the PlayStation 2's life cycle.

The game opens in an attic room, where a young girl named Alice is reading her grandfather's books, a series of stories about a magical world...

The nation of Valentine used to be a prosperous kingdom, until the greedy King Valentine held control over a magical relic called the "Crystallization Cauldron". He used it to conquer the nearby nations, but eventually lost control of it, and watched as it destroyed his kingdom almost overnight.

Now, several other nations are fighting over the ownership of the Cauldron, and thus the world. The war is told through the separate viewpoints of five characters:

Aside from its multiple playable characters and connected story, Odin Sphere is notable for its high-quality 2D art, in an age of 3D Polygonal Graphics. The game's story, characters, and other tropes were heavily inspired by Norse Mythology, and especially Richard Wagner's Der Ring des Nibelungen.

An Updated Re-release, Odin Sphere: Leifthrasir, was released for PS3, PS4, and PlayStation Vita on January 14th, 2016 in Japan and in June that year in other territories. It features High Definition graphics and the ability to switch from the classic gameplay mechanics to revamped ones based on Odin Sphere's Spiritual Successors, Muramasa: The Demon Blade and Dragon's Crown.